Beaune will be etched in our minds, amongst other merrier reasons, forever, as the place, where we met with our first ever Road accident, internationally.

To get that out-of-the-way, it was a low velocity impact.. being on country roads, close to Beaune, thankfully the metal took the brunt and the bodies involved were all safe, this incident highlighted the attitude of french..

1. The other party involved who were local french family were much more worried about us, than being bothered about their battered car.

2. The “french” locals as well as the Gendarmerie, won our hearts, with their sympathetic and uber helpful attitude helping us with everything including language constraints.

3. It’s highly advisable to get comprehensive car insurance! Can’t speak about it enough. This made the aftermath so smooth with pick ups and transfer to Dijon, the next big town, and smooth transition to the next car, all arranged by AVIS.

4. Never drink and drive. Especially take care to spit and not swallow if you’re wine tasting in a wine country. A lesser mortal might be tempted to take in a few swigs.. especially if there are Grand Cru and premiere Cru wines from the worlds best wine country, on the offing! But not dear hubby!! I already had enough confidence in him which only peaked after this episode. We were incidentally returning from a wine brunch when this happened. His breath analysis for alcohol came out negative.

5. Never give up, keep faith. Some of the members wanted to give up on the trip.. (imagine!).. but no way were we going to shelve a wonderfully planned journey and we carried on!

Beaune is a beautiful small town in Burgundy (Bourgogne) and also considered its wine capital, nested amidst the lush vineyards of Côte d’Or region.

We travelled from Paris on a Saturday morning so we could visit the weekly market at Beaune centre. Started from Paris about 10:30 and reached about noon. 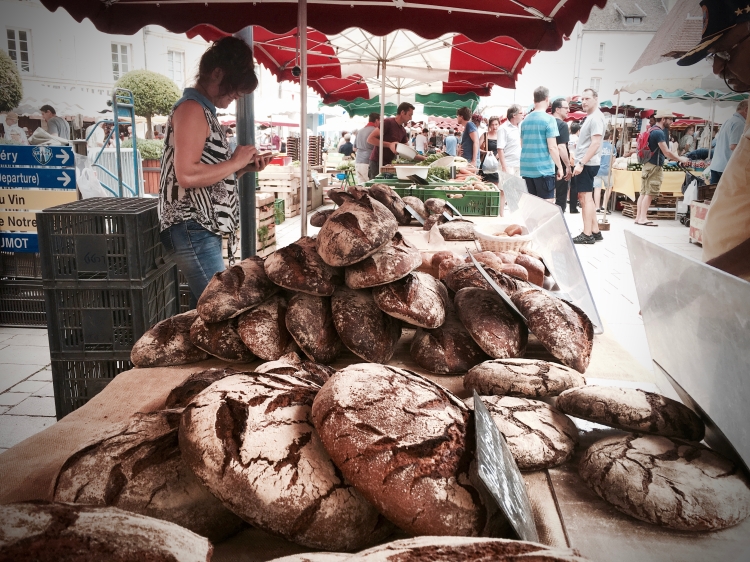 The market area is divided into a large food plaza and a clothing / home decor section; sifting quickly through the latter we lazily strolled trough the food section, sampling local delectables and picking up freshest of baked goods and veggies, cheeses, mushrooms etc. Bought a whole lot of Truffle and truffle infused products, the regional delicacy of Bourgogne. A quirky thing on sale was dried onion flowers which is crisp and flavorful when sprinkled on salads and dishes. 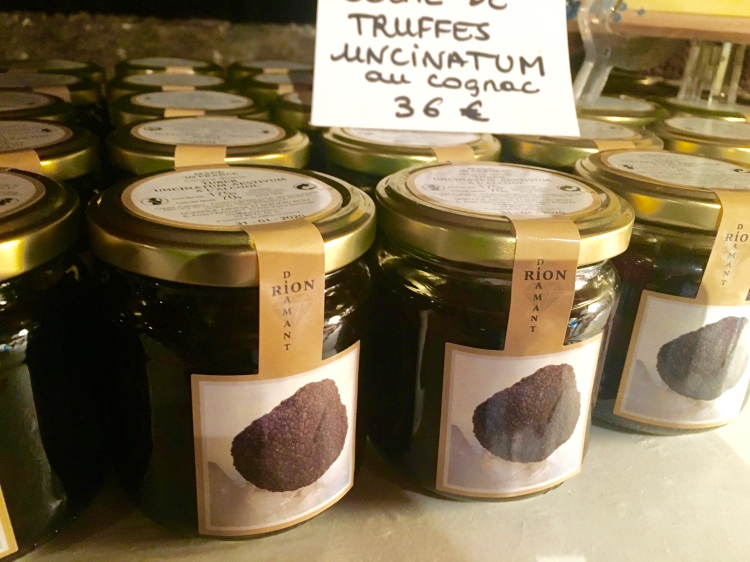 We unfortunately missed out on the yearly wine fest in village of Volnay on the same morning, held every year about this time. So those travelling in end June should check this out.

Lunch was pre booked at a wonderful restaurant, recommended by a good friend, and is called L’ô à la Bouche. And what a recommendation.. for a perfect sunny brunch, by the side of a tiny brook and a pond with ducklings.. straight out of an Enid Blyton book! Only thing missing was a picnic basket, the lack of which was made up by the delectable lunch in the offing. This reminded me of the song The Perfect day, by Lou Reed! 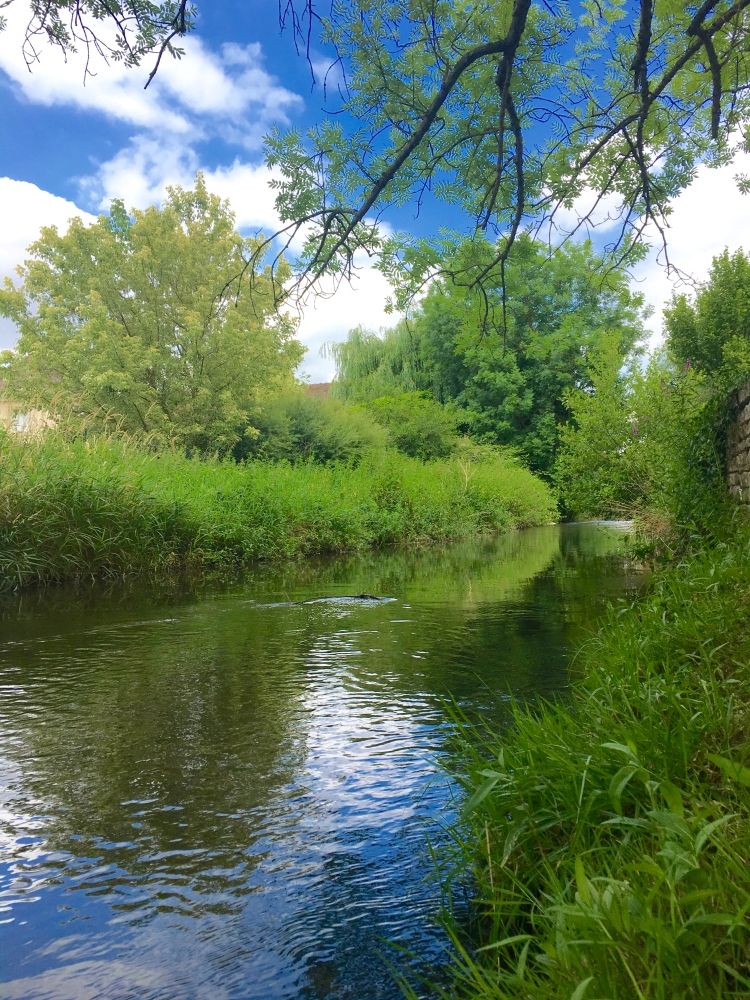 After lounging about for an extended meal, we laggardly headed to our B&B within town, having chosen this for its proximity to the town centre as well as the bike rentals. Since we’re the “go-getters”, we headed straight out to “Bourgogne Randonees” to pick up our bikes which were previously reserved, since they’re much in demand!

The gentleman at the shop was very helpful but somehow we muddled up the directions that he gave for the bike path. We went round the town at least twice..had some not so serious falls, (first mom, then dad).. which pretty much shelved biking plan on that day!

Not losing hope, we strapped ourselves in the car seats and drove to the nearby village of Pommard, instead of cycling to it.. to meet for an appointment at a winery called Domaine Rebourgeon-Mure. Have to say that the owner, completely floored us by patiently waiting for us to show up for a tasting, beyond usual hours, at least 2 hours after our appointment… thus breaking the ‘myth’ of snooty uptight, french wine makers of burgundy, worlds oldest wine country! Here we could venture into a true vine cellar, centuries old with moldy dusty walls, cobwebs and candles, thankfully did not bump into any vampires!! Picked up couple of delicious Premiere Cru wines from this winemaker.

Day 2 was devoted to visiting nearby villages and their famous wine makers. These include Puligny Montrachet, Aloxe-Corton and Meursault. 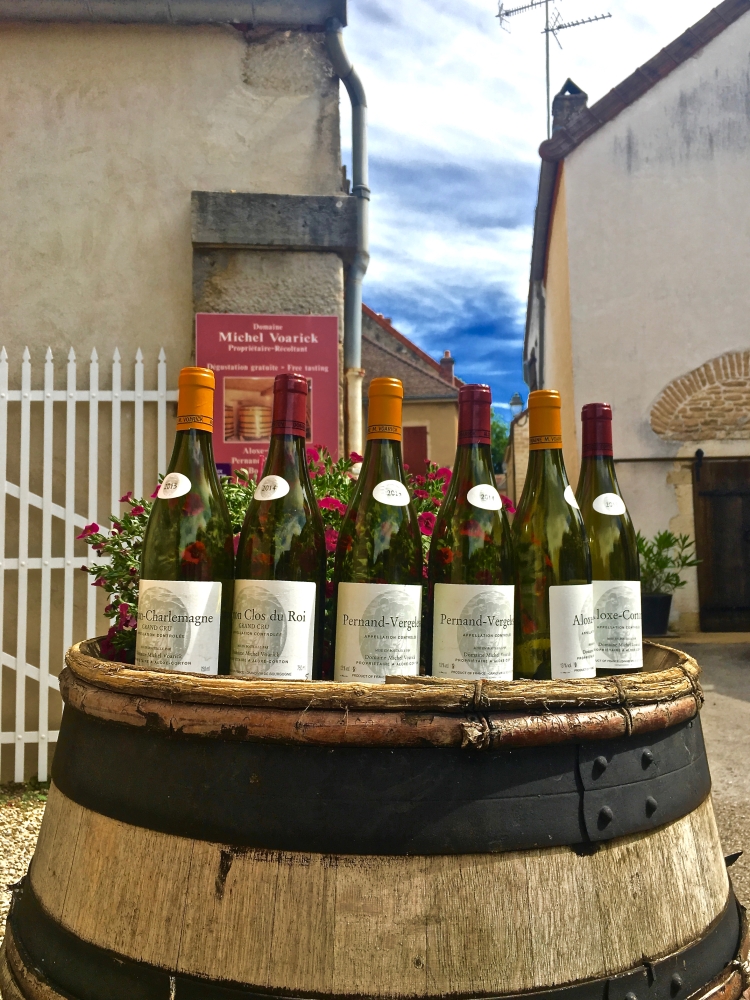 Serendipitously ventured into an amazing restaurant in Meursault called Chez Richard, where we sampled the famous Epoisses cheese and the regional delicacy, the escargot! 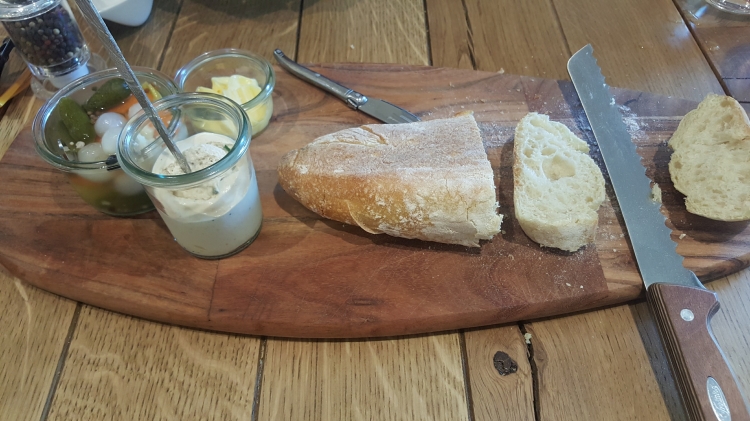 After sating our appetite, and not sure about the next plan.. we decided to again give cycling a go. Having experienced other wine countries on a bike, we didn’t want to miss out on this experience in the french country.

So instead of renting the bike in town centre, we researched and reached Bougogne Evasion, located very close to the entrance gate of the Véloroute (bike-path) and thus minimising chances of our getting lost again!!

A pillared gate welcomes cyclists to the -Véloroute of Voie des Vignes, and right after entering, one is transported to serene, lush wine country surrounded by pallisading rows of verdant green vines and clear blue skies.

The stillness is interrupted only by the whirring of the bicycle wheels, chirping of the birds and the camera clicks! It’s a perfect detox for an urban dweller. 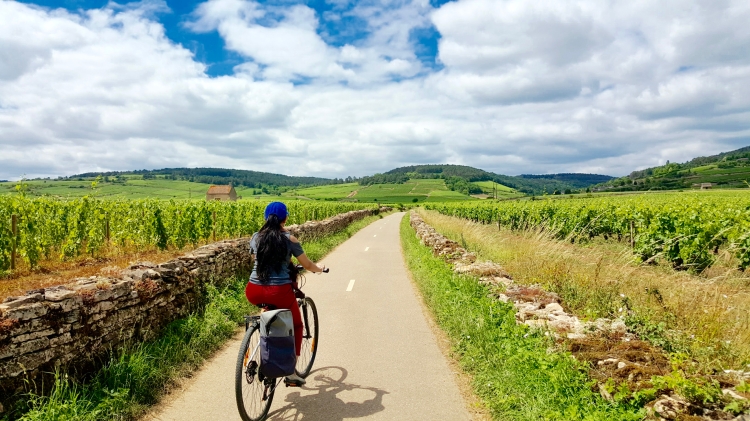 Being later in the day and considering the fitness levels of all, we chose to bike the shortest path from Beaune to Pommard, a short 20-30 minute ride, the terrain being mostly flat, with mild undulations. Path to village of Volnay is quiet steep and we skipped it. Do remember that wine countries are hot and sunny so be prepared with caps, sunscreen and lots of water, as there are no pit-stops between villages. Another point to remember is that cycling/ walking path is through vineyards but there’s no wine tasting rooms in between. Tasting is localised at abundant wine shops and in cellars in the villages or available with meals in the restaurants, latter being a wonderful idea after a bit of exercise 😊

Done with cycling, we had only managed to touch 4 o’clock on the watch, with the sun shining brightly and too early to call it a day. Guess what? We decided to visit Dijon, a half an hour ride away from Beaune. Despite knowing that Dijon is a big town, we were quite overwhelmed by its size and the traffic on the roads. I guess we were lucky that it was a Sunday and there were no major traffic snarls!

Since we were running against time, we headed straight to the town centre to see the Notre Dame cathedral and to follow the famous Owl Trail.

Within the city centre are many owl plaques, engraved on the pavement with numbers, guiding the tourists around many important landmark including the cathedral. One can buy a book from the town centre or easier, can download a mobile app, which tells in detail about every structure/ monument on the trail.

Saying goes that if you spot and touch the owl on a corner wall, at the end of the trail, it’s supposed to be lucky in getting you back to Dijon!

Another incident to remember, happened in Dijon, where for some reason our parking ticket was defective and we were sort of trapped in an underground parking. Again, a helpful local Frenchman, who didn’t understand a word of English, came to our rescue!!

We started the next and last day in Bourgogne, on a spicy note by a visit to the famous, Edmond Fallot Moutarderie, a mustard factory/ shop.. famous for the Dijon mustard! Bought few varieties of mustard and other products.

Following this, we set course for the adjacent commune (region) of Nuits-Saint-Georges. Both Côte de Beaune and Côte de Nuits-Saint-Georges are the famous wine regions in Burgundy (Bourgogne) with the former popular for its Chardonnay and the latter for its Pinot Noir wines!

It’s fascinating trying to understand the French wine appellation system. Breaking it down very, very broadly, the lowest in class would be a Regional wine (for example a bottle saying Bourdeaux or Burgundy), followed by Subregional category (example Côte de Beaune), followed by Village wine (example Pommard in Côte de Beaune) and finally the top most category is a single Domaine or vineyard. Then ofcourse there are Grand Cru (Burgundy regions best wines) and Premiere Cru (second best wines). Best refer to THE INTERNET for the same!

We did another wine tasting in Vosné Romanée, at Domaine Bernard Rion and bought some more wines for consumption! Hubby dear believes in bringing some back and I’m always worried about the Packing!

DH had earlier reserved a 4 course wine lunch at Olivier Leflaive. They serve a basic lunch menu to highlight the wine, but despite knowing this, ‘the vegetarians’ were disappointed with the serving of Boiled beans and cheese. At least, dear hubby enjoyed the Beouf Bourgogne with the paired Grand Cru andPremiere Cru wines.

One can also do Truffle hunting with tasting in this region, but the same wasn’t available on the dates when we were in the region.

To summarize, Burgundy was wonderful; the highlights being the cycling through the vineyards and the Pinot Noir! Hoping we’ll be back soon, especially with the blessings of the Dijon Owl.

Medical professional’s by occupation and explorers by heart for all things exotic, be it food, fads or faraway lands. “Sri” is the vagabond husband, whose passion for exploration knows no limits. He loves trip planning almost as much as the travel itself and could really pursue this as a carreer! Every trip is unique, meticulously planned and researched to the D, by Sri to accommodate the littlest whim of the youngest member and the craziest fancy of DW. Ruchi is the partner in crime, stoking the embers of restlessness and egging the hubby to plan the next one! And to pose graciously and get clicked. We love nature and though we land in a big city always, we quickly drive out to the country! This blog aims to be a compilation of our travels (not wanting the memories to fade), our experiments with foods and beverages ;) and sharing everyday novelties of life...especially with an adventurous young tyke amidst us! Also, a catalogue of our travel pictures. Most of the trips have been as a couple but we decided long before conception, that travel can never stop. So post the baby, it was the the baby carrier which was an essential item on the travel list which has helped us traverse the underground caves in vietnam, bylanes of bali, sauntering in the central park or hiking in the Swiss Alps! And then there are the Fockers...both sets of in-laws, who have been our travel companions on some of these journeys which makes things even more interesting while balancing everyone's tantrums! We hope these pages can inspire some of you guys to get out of your comfort zones, rent that car and go vroom…. View more posts

2 thoughts on “A ride to remember- in Bourgogne.”