A road-trip to the famous Bordeaux region of france and stay in the lush countryside around St Emilion!

We visited the region of Bordeaux, in the south-west France, in July 2017, as part of our french summer holiday. After landing in Paris we stayed on for a few days, showing the basic sights to the little one, including the Eiffel Tower, the lit up pyramids and Seine river cruise. (The entire trip was planned around his obsession with Eiffel Tower souvenir back home)!

The second leg of the road trip was Bourgogne (Burgundy). We stayed in Beaune, thoroughly enjoyed the road trip despite having met with a road accident, which delayed us by a day, shortening our furlough to Bordeaux…the details in the previous post, A ride to remember, in Bourgogne.

I titled this trip as “A Repose” to Bordeaux, because that is what it was. Resting time. Repose time. After the mis-adventure in Beaune, the consequent delay, and the long drive between Bourgogne to Bordeaux (nearly 8 hours), we just wanted to relax. The Air B&B that we booked at St Terre, a 5 minute drive from St Emilion, was just what the doctor prescribed!

We chose to stay at the outskirts of the town to be able to stay amidst the serene lush vineyards, away from the touristy Hum-drum, get into the feel of the countryside and still be in close proximity to the beautiful town of St Emilion.

We were hosted by Sabine and Jean Baptiste, in their Gîte (french country house), amidst the Vignobles Daniel Mouty (vignobles meaning vineyards in french), the latter being a well known Bordeaux wine producer. Jean Baptiste is a charmer, and received us with wide arms and pleasant smile, making us feel welcome, at once. He showed us around the beautiful property and the two storey house, all open to us, the vineyards, the small plunge pool and the gardens, equipped with a TT table and even a sand pit for the little one! The Gîte was very well equipped with all basic essentials, and some more. He bought along a delicious deep Pomerol from their vineyards, as a welcome gift and welcomed us to visit their winery for a tasting, anytime! 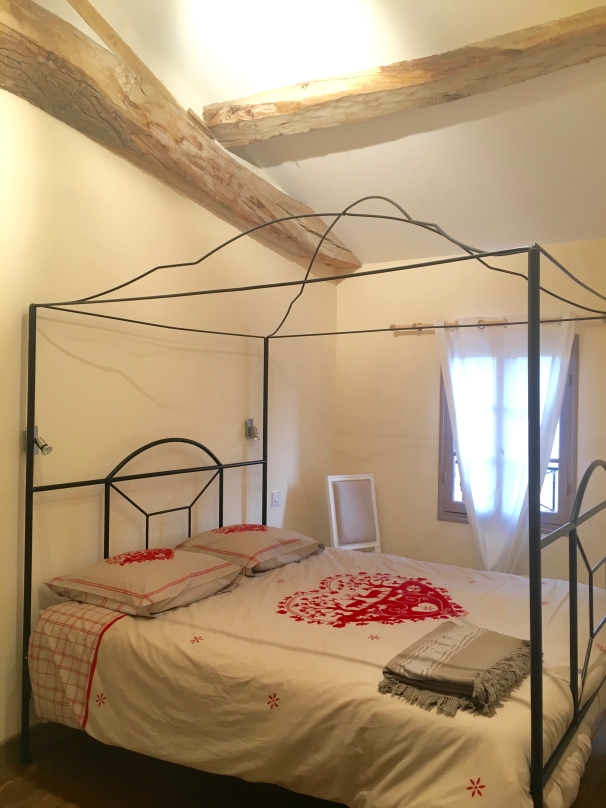 We immediately settled in, feeling at home in our beautiful surroundings, uncorked a bottle of wine and parked ourselves on the lounge chairs in the garden, (which was nothing but a large, cleared patch within the vineyard), commanding a spectacular view of the verdant landscape. 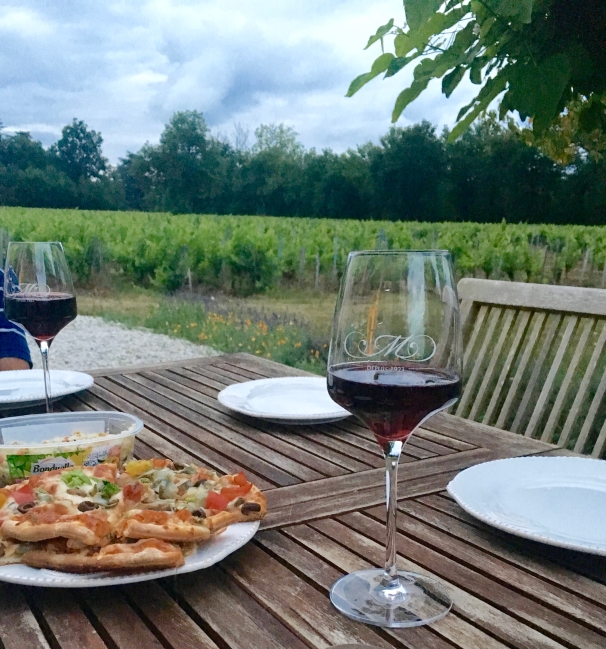 The raw grape vines swayed gently in the cool breeze, as the evening sun still shone brightly and the little one squandered about checking out the property. No one had any intention of moving from this otherworldly nest, even for dining out, since we were well stocked with essentials, thanks to a prior detour to Carrefour- Liburon.

Day after, was another lazy morning with staggered breakfast almost amounting to brunch, when we all voted to finally venture out of this blissful country existence.

Of course, DH had wine tastings lined up, and we started by visiting Chateau Gueyrosse, in adjoining Town of Liburon, at the edge of the river Dordogne. DH, is a meticulous planner and always takes into consideration, every member’s needs. That is inclusive of the youngest, who’s 5 yr old. There are many wineries and Chateaus which provide activities to engage the younger ones. Chateau Gueyrosse has beautiful gardens, a river flowing by and an overall picturesque property where the little one could wander about and explore.

Here the grown ups learnt about the organic farming methods and manual harvesting techniques. We took a tour of the vineyards, the grounds of the chateau as well as their winery, tasted some great wines and bought a 2011 Ch Gueyrosse.

This would be a good place, to touch-upon the unusually complex topic of Bordeaux wine classification system. For a generic wine enthusiast, like moi, this was an engaging discovery!

It is a convoluted system, especially enigmatic for the New-world consumers, since here, the wines are classified according to where the grapes are grown i.e the “Terroir” and not by the grape varietal. A bottle of Bordeaux wine will detail the Region/ Chateau, Year and appellation, but not the grape varietal, that one usually expects.

Bordeaux produces red wines in majority and they are always a blend, usually of Merlot, Cabernet Sauvignon and Cabernet Franc, in varying proportions. 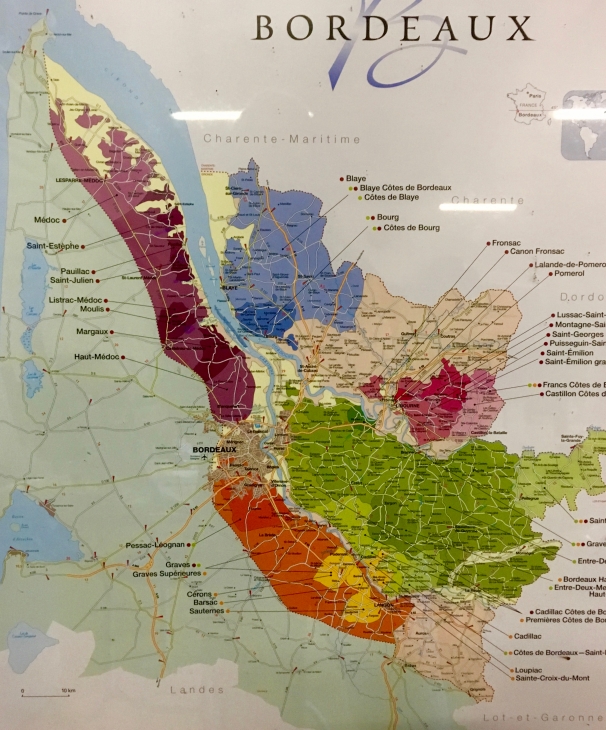 The Bordeaux region is divided broadly into the “left bank” and the “right bank” by the river Gironde and its tributaries, the Garrone and Dordogne. While the left bank (the Medoc and Grave region) enjoys an elite status following the famous 1855 classification, and mainly highlights Cabernet Sauvignon (with blends of merlot and Cabernet franc); the Right bank relies more on the Merlot with blends from the others, and follows different appellation systems, most prominent being the St Emillion appellation.

Though the elitist wines from the 1st to 5th growths, on the left bank are clearly un-affordable, there are many very well priced Bordeaux wines in the market.

Coming to our day out. Next we steered towards St Emilion! Typically google maps, on the “shortest route available mode” navigated us through vineyards and narrow lanes towards the town.. though not the best possible approach, it was quite picturesque!

From far we spotted the church spire first… which loomed large as we reached the town centre.. where expectedly there wasn’t any parking to be found. So we drove some distance, parked next to a restaurant and walked the short distance to town centre.

St Emilion is one of the best looking small towns we’ve ever been too.. closely competing with the Andalusian towns of Cordova and Ronda. When I picture it, I see medieval, pale yellow ? lime stone buildings, lining narrow cobblestoned streets, sloping down to the town periphery and rising upto the bell tower and winding alleys meandering through the town. 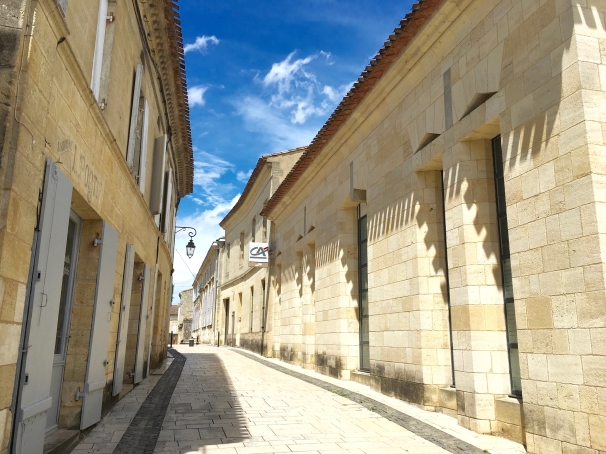 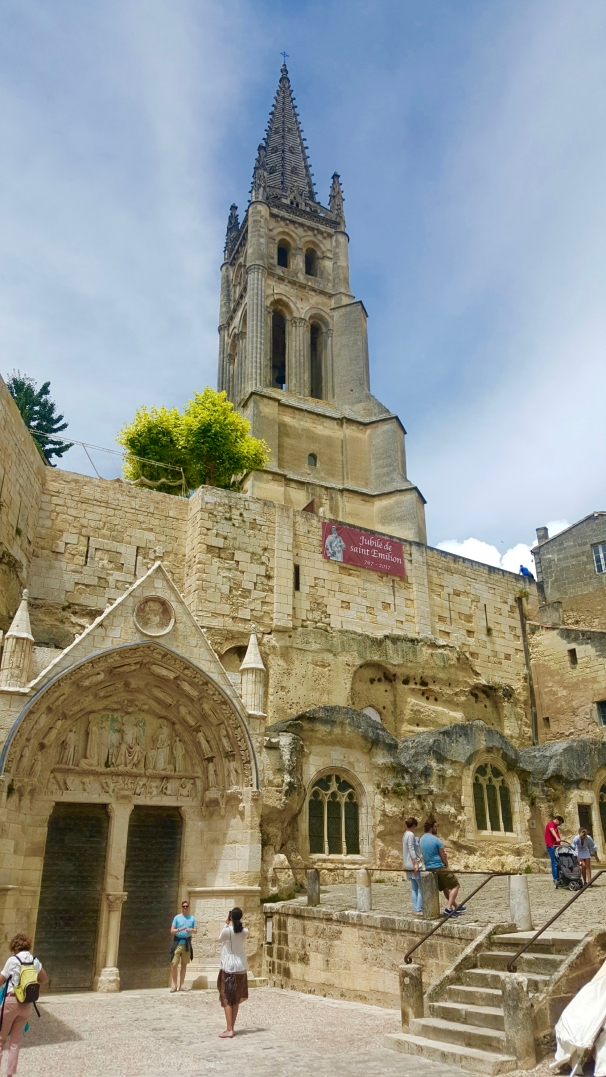 The architectural highlight is the church and bell- tower, towering above the beautiful town and its surrounding acres of lush country-side. The views from the bell tower are breath-taking!

Spent couple of hours just sauntering through the town, the boutique shops and eateries at a leisurely pace and soaking the views.

Then literally walked down to nearby Chateau Cadet Bon for another Grand Cru tasting where the no-more- wine inclined folks just enjoyed another view of the town from this side of the vineyards. 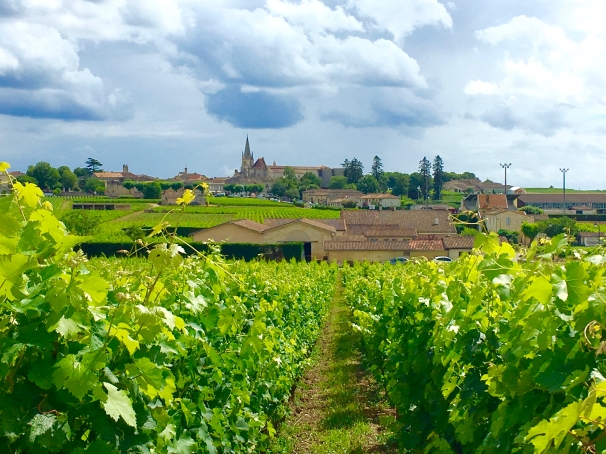 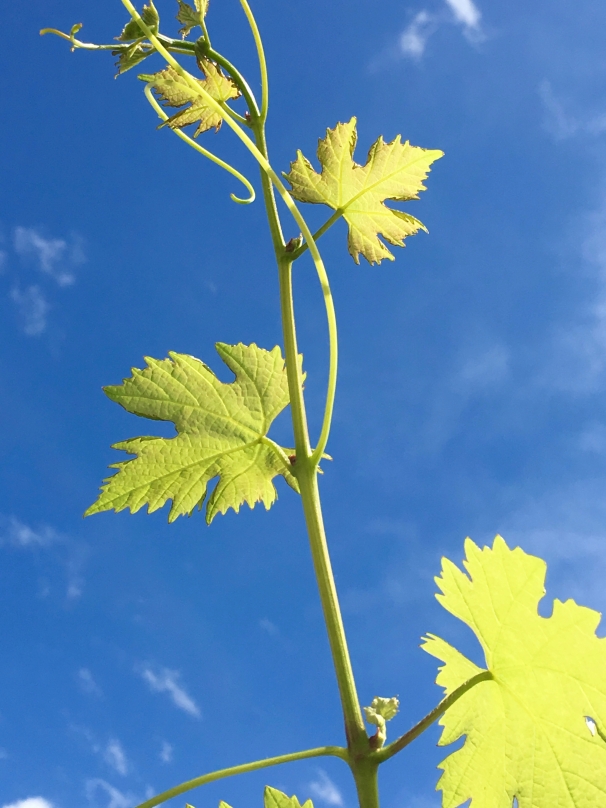 We wanted to really go easy so didn’t venture to the left bank at all. Visit to the city of Bordeaux was originally on the itinerary for the this evening…but we forgo it to relax at “our” wine-stay! 😊

Did visit the winery at Vignoble Daniel Mouty, a really short walk from the Gîte, for one last tasting in this wonderful wine country! 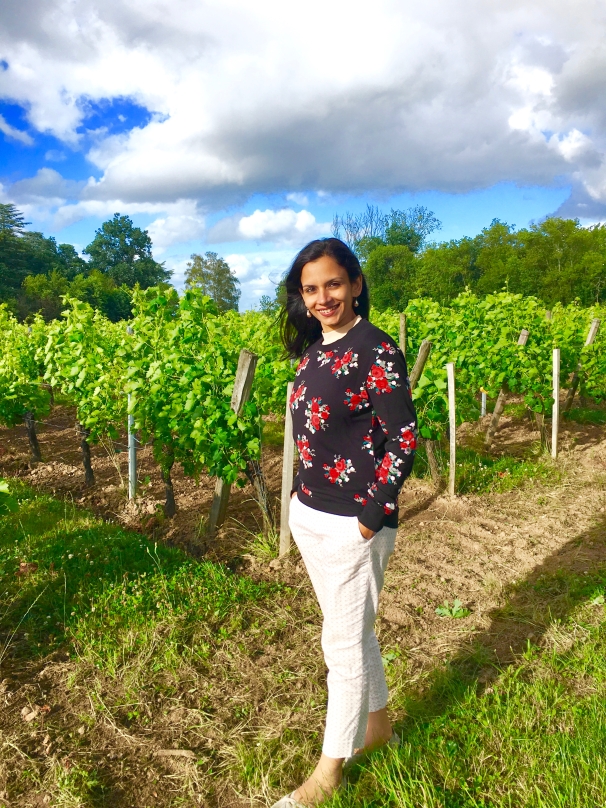 Maybe, not just yet…

The trip out of Bordeaux, next morning was nothing short of a thriller movie- an early morning flight from city of Bordeaux, so an even earlier departure from St Terre(an hour long journey to Bordeaux Mérignac airport) at 5 am; driving the country roads and eventually the highways, in torrential downpour; couple of detours thanks to poor visibility and GPS re-routings… when we finally approached the airport, the GPS, as usual, lost it, and couldn’t direct us to Avis Rental car drop. By sheer poor luck, we entered a long term car parking.. and could not exit!! Literally.. it was like the song “Hotel California- you can enter but you can never leave! “. As we later understood., with long term parking, one parks the car, collects the ticket, flies out, on arrival, one gets the ticket validated inside the airport and uses that ticket to exit the car park. Since we were not that smart to begin with, we tried to exit using this ticket when the machine flashed ” validation required” in french.. translated it using google translator, tried to ask around for help but there was nobody to ask! Once we figured things, one of us went running to the terminal, a good walk away, tried to validate the ticket, but failed as the machine pointed out.. “this ticket has been already used to exit”!! Now what? .. in the cold weather we were sweating Bricks, couldn’t leave the car there, couldn’t exit, sure to miss the flight!! Made one last effort to talk to Avis rental at the airport who directed us to Avis drop off facility, ran from one place to the other.. and I guess it was the panic on our faces.. and the convoluted way that we tried to explain the situation which garnered sympathy from those officers who told us to leave the car where it was, and walk out with our bags!! Phew. Even then the ordeal was far from over.. we had to lug the heavy duty luggage from the farthest available parking slot in the pouring rain to be able to reach the boarding counter .. just in nick of time.